My Artist Residency in Lapland

Lapland is the Northern part of Finland above the Arctic Circle. It is where Santa Claus lives. Several Santa’s. I found my Santa in Rovenimieni where our plane landed before driving to the Artist Residency in Kemijärvi where my husband and photographer, David Vogel, who accompanied me, and I would stay for 5 weeks.

I applied to this residency as it was the one furthest North in Finland. I had seen pictures of the area and it spoke to me of lakes and open spaces, 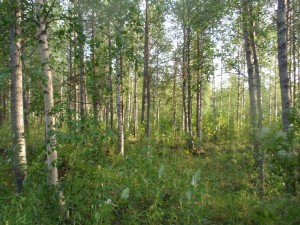 good inspiration for my reductive paintings. What surprised me as we drove the highway to Kemijärvi were the trees lining the road. Different types of forests with birch trees and evergreens predominating, their different heights telling me if they were third or fourth or more growth forests. The impressive thing visually was that this world appeared vertical to me and I had anticipated a horizontal minimal landscape.

After settling in our apartment at the residency in the center of the small town, population 8000, I decided to use one of the 4 light soaked rooms there as my studio rather then the darker artist studios provided on the first floor. I immediately scrounged up the furniture and lights that would make it workable and was ready to go.

But first, David and I followed the many bike and walking paths that took us to the lakes that surround the town. Here I found the skies and water that would profoundly affect my work there.

Ah, I neglected to say that traveling to Moscow, St Petersburg and Helsinki preceded our foray up North. Each of those cities was remarkable in their own ways.

Moscow for its chic surprises and icons of the Cold War as well as the religious icons in the Orthodox churches. St. Petersburg for its sheer beauty and, of course, the Hermitage collections and Helsinki for its down-hominess and ease. These visits were all made in the “white night” season and we were struggling to adjust to no dark nights. Beautiful, playful yes but very tiring as sleep evaded us- solved after a couple of weeks with the purchase of night blinders.

As novel and exciting as those travels were we were being touristy in the sense of experiencing and learning and seeing but I not in the mood or place to “work” yet.

When traveling like that I use photography to record what interests me to use in a “working mode” later.

Ok back to Kemijärvi. I brought with me the materials I would need to do some wood cut prints. I was inspired by the residency, which also sponsors a bi-annual wood sculpture symposium. Twenty plus selected artists come from all over the world to cut and carve for one week, producing works that are displayed everywhere and anywhere in this small town.

The first work that I did, however, was some black ink mono prints that just let me “feel” the vertical forest landscape. I felt more comfortable once I connected with this reality and in fact started to think in terms of “forest, wood, tree, forestry, clear cut forests” video possibilities. Over the weeks David helped me as we investigated these themes and shot footage. Keep tuned to find out how these ideas pan out.

I then started to carve wood plates for printing keeping my ‘shop’ simple and not too technical. 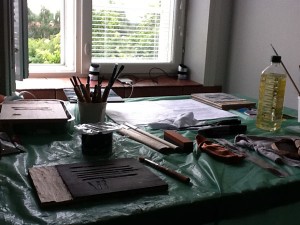 When I was ready to try a print I used dampened Japanese papers, a bambino barren and Japanese watercolors. I printed an entire lake scene first which then simplified to the water (no surprise here) using the same plate but inking only part of it. Afterwards I made some bolder cuts on plates and experimented with tree abstractions and more.

During the 2 weeks of doing this work on and off as well as photographing we were experiencing the community and environment around us to internalize our experience.

Finland and the Finnish people were a delightful enigma to us and so we indulged ourselves in their Church Boat races and their tractor parades and just being there.

At the 2-week mark we decided to take a trip further north to some of the communities where the indigenous people, called Sami, lived and also to the North coast of Norway and the fiords. We both love our “motor trips” so we happily drove our little rented red Volkswagen. We went to the Inari Lake area driving north where there is a museum that helped us to understand the culture a little bit. We concluded that indigenous people everywhere have had a difficult plight but the Sami are emerging stronger and prideful of their heritage now. Driving south on the way home we stopped in Norway at the Sami    Parliament, a wonderful modern structure that houses their representatives.

The Sami are the reindeer herders of Northern Sweden, Norway, Finland and Russia, which is called Lapland. Wild rain deer are prevalent on all the highways and we had to be very alert to avoid hitting many as they crossed the roads. Beautiful and exciting to see with impossibly big antlers and all shades and colors. We ate a lot of reindeer meat in all kinds of combination.

As we drove North the landscape started to change as we finally saw ‘fells’ which are treeless areas of small mountains, the trees were smaller and I could see further and experience more vast landscapes. 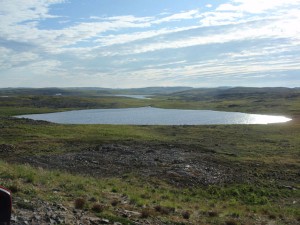 By the time we got to Norway’s coast late at night we were awestruck with views that never ended, lakes that appeared as level with the land and coastlines that jagged and jutted architecturally. The night was even more ‘white’ further North. It was so clear and translucent I felt it was like a looking glass view of day.

Our time in Norway was brief but very impressionable and I eagerly went back to work in the studio when we returned. I worked on 5×5″ gesso’d boards and painted skyscapes and waterscapes at different times and light usually just diving into the space not caring to demonstrate the top or bottom or horizon line but wanting to capture the special color and feeling of the moment. I was using oil sticks and could blend easily with a stick that has no color. I was amazed at how many white boards I painted but there is a time in the early morning hours when the sun has finally gone down and is lingering ready to pop up again, when there isn’t color in the sky and it is just light and a white. 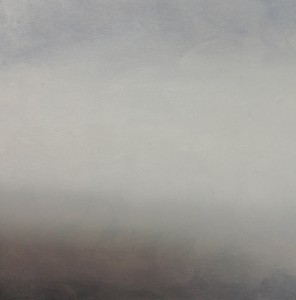 Beautiful. I completed 32 of these boards and will complete them with framing when I’m back in my home studio.

The last work I made was. Some gouache paint poured on vellum paper to make notes of the predominant colors that I consistently saw. Barn red on houses and barns and out buildings and commercial buildings. If a house wasn’t red it was ochre and the environment because of these colors always seemed happy even on cloudy days. I can see why these colors would brighten dark winter. By the by I’m told by the locals that the winters don’t seem so dark because of the white snow on the ground. It sounds upside-down to me but I’d love to see it! The other colors of the poured works are the ever-present blue for the water, the lush green because the water makes everything grow and the brown of the tree trunks.

During the end of the third week the residency asked that we do an exhibit of our work for the community. We got that together in 3-4 days. We transformed their gallery space into a theater space and I gave a power point presentation of my career and how my work evolved and David projected some of his wonderful photos.

The gallery had another space where we put partition boards to hang some of my work and then tables to set my paintings and work on. 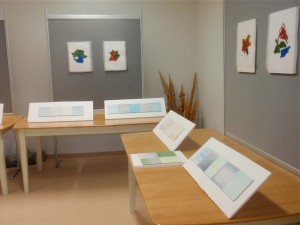 We invented a method to elevate the paintings and I experimented with groupings them in 4s, 5s and 7s that I thought demonstrated certain moods of their environment. We called the evening, “Finnish Impressions,” and the residency went into high gear and we had publicity, radio interviews and a reception and were given very positive feedback. It felt good to do something to give back to a community that had been very generous to us.

Now home. It felt a little sad to leave this incredible place and some attachments I formed, especially to the mom and dad swan in the lake close by, but I’ve decided to find a way to experience both polar poles because of this exposure so I’m excited to get those plans started. Also I am ready to return to my home studio and finish the work I started in Finland. Then too there will be the usual somewhat painful task of ‘catch up’ but also both some scheduled and potential new opportunities. Stay tuned. 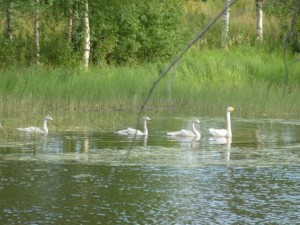