When my husband and I visited Alaska several years ago the one place I truly wanted to visit was the city of Barrow. It was a heartfelt and non-logical desire. Barrow way way up North at the end of the 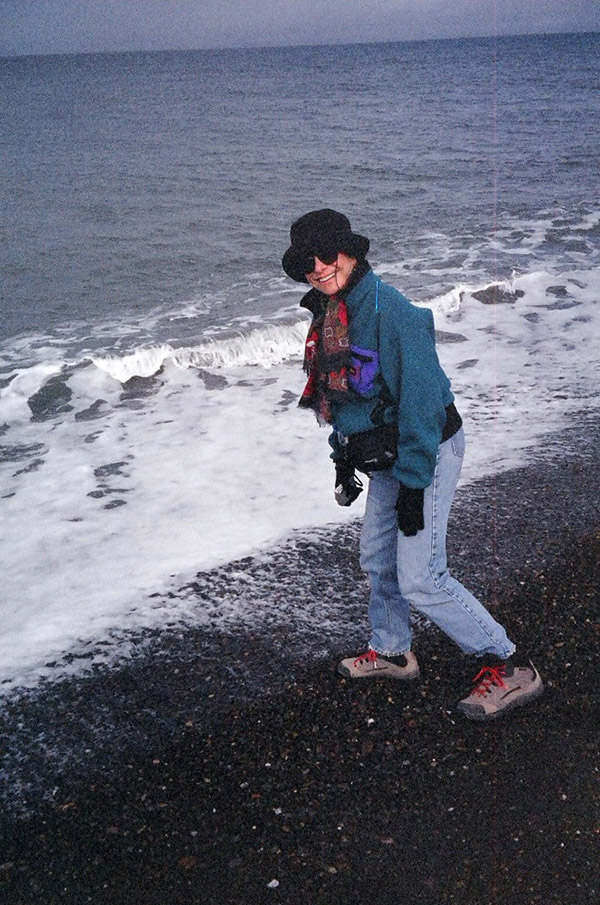 world called to me with a Siren’s song. I didn’t know what to expect but as we traveled the length and breadth of Alaska. It was my most memorable and inspiring experience.

Flying to Barrow from Fairbanks I could see and sense it’s remoteness from the skies. We landed on a small airstrip and bused into the small village built on tundra and permafrost. The buildings showed their history of hard winters and their stilt construction made them appear tenuous. The landscape was flat with grasses that looked as though a hair iron had pulled it through its prongs until it was straightened smooth. Winds from the sea had bent the grasses down to its roots.

But it was standing staring out into the Arctic Ocean’s horizon and dipping my toes into its freezing waters that fulfilled my primal need–that of traveling to the ‘end’ or maybe more accurately the ‘beginning’. 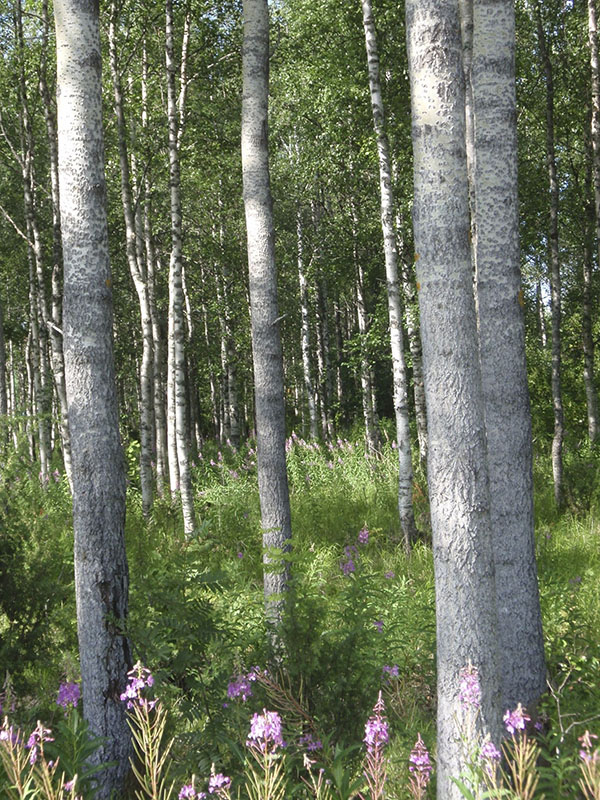 Seduced by Barrow, I applied and received an artist residency in the town of Kimijarvi, north of Finland’s Arctic Circle and Finland’s northernmost city. At first I was disappointed as we drove to the Residency from the Rovaniemi Airport about 60 minutes south of Kemijarvi. I saw forests to the right and left, in front of us and to the rear. We were enclosed by verticality, busyness and green-ness–not the minimalism I expected. But soon the translucent 24 hour light won me over making me feel as though I could climb right up into the sky passing through the air and clouds to the heavens above. Visiting Norway to the North all the way to the sea gave opportunities at the top of the fiords to see minimal landscapes with land and water meeting at the same ground level seamlessly with nothing to obstruct my views. 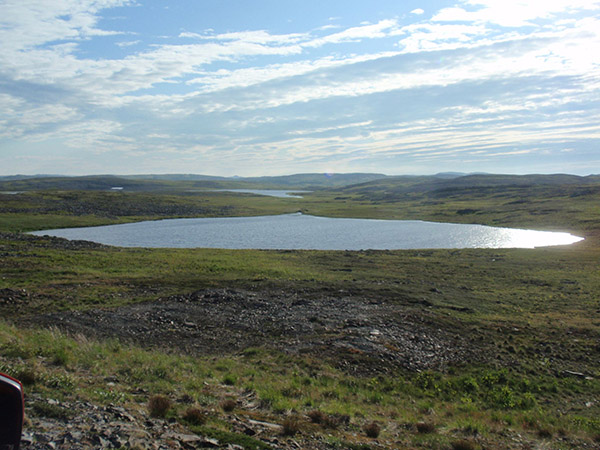 Almost immediately after leaving Finland I started longing for a polar experience. I researched the possibilities and honed in on the Antarctic Continent–way way down in a different season plane. I petitioned and won my willing husband over and then 9 months of planning and outfitting ensued. The busyness of planning the expedition stalled any conscious thinking on my part of what the trip would really entail. I just operated on the knowledge that I wanted to go. It wasn’t until just a month or so before we left that the reality of crossing the Drake Passage at Cape Horn occurred to me when I remembered reading about it’s water’s treacherous possibilities.

Working our way down Argentina’s Patagonia made me realize the potential enormity of our trip. Everything in Patagonia seemed large and spectacular. The Perito Moreno Glacier, the mountains, 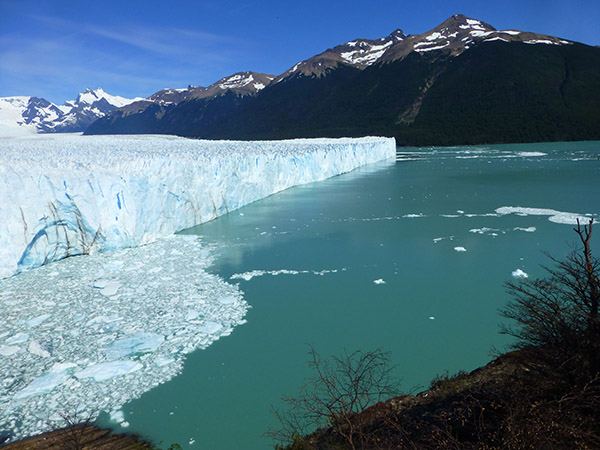 the sunsets, the sheep estancias, the Andes. Then finally we arrived at Ushuaia the southern most city in the Americas (and serendipitously the sister city of Barrow, Alaska) where we were to board our Russian Research ship, Vavilov. The Beagle Channel at Ushuaia leading to the Drake Passage promised and threatened as I stared out into the seas that would soon be mine to conquer. There was no denying we were in for an adventure, I just didn’t know what just yet but I had a longing, a craving to get out there and do ‘it’. 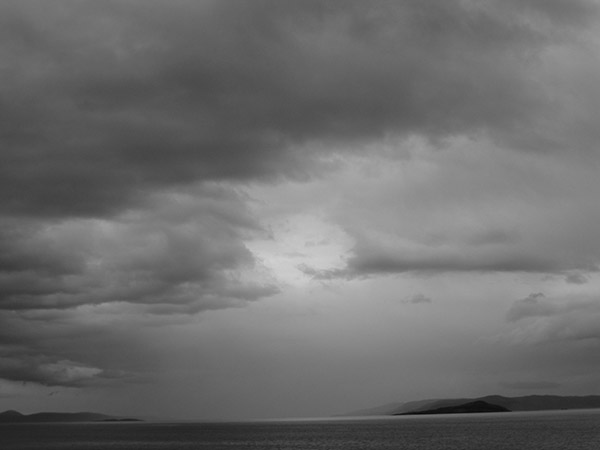 As we boarded the Vavilov and made our way through the Canal seeing Ushuaia fade and the waters open we were told that there was a storm in the Drake and that we should be prepared with whatever medications we would need. We were instructed in the “one hand for the ship” rule of always holding on to something (not doorways) when walking or climbing stairs to prevent falling injuries. A clue as to what to expect, eh?

This was our entree into 2.5 days of turbulent seas, the power of which I had never experienced. My ‘patch’ and meds kept me safely sleeping on and off as the boat was hurled and lifted and slammed. 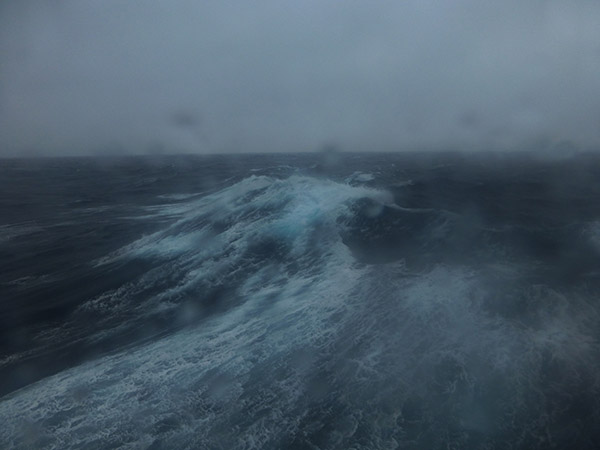 50-foot waves treated the ship like it was a plaything but the Russian crew’s experience kept us navigating the rough waters with exceptional skills. My husband and I would marvel at the rocking of our bed; now we’re on our heads and now on our feet with a shake and rumble in-between and a slam now and again. The strength of the water was unbelievable. Nature in the raw. It was scary but also incredible as we watched the seas pound our cabin windows over and over with visual patterns that were spellbinding. 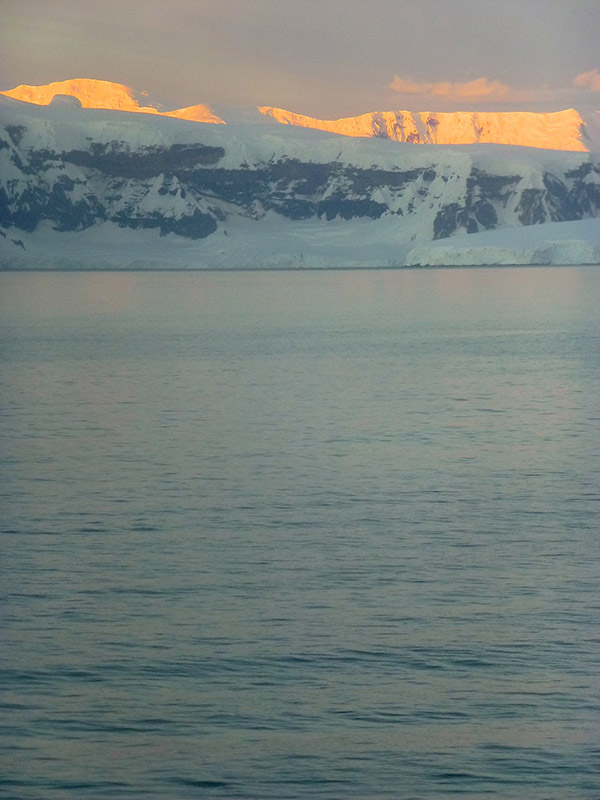 Then one morning at 3 am the sun rose in its magnificence of reds, pinks, oranges and yellows hitting the snow covered mounds on the land around us and illuminating paths in the water. It was gorgeous. I mean so gorgeous I wanted to sing one of the great ‘glory to god’ hymns. The light was clear, radiant, and transformational all the more so for the darkness we had just passed through. If you ever believed you need darkness to see the light, this was it–the ying and yang of all time.

Then days of dressing in our many layers and undressing and dressing again. Learning how to do a sailor’s handhold into the Zodiacs to cruise or do landings and hikes on the continent. Each outing unique, each one a blessing for the soul. The Antarctic is a wonderment. I was in the grips of awe all the time. So much so that my intellect luckily left me. Usually so curious and wanting to ‘know’ everything I 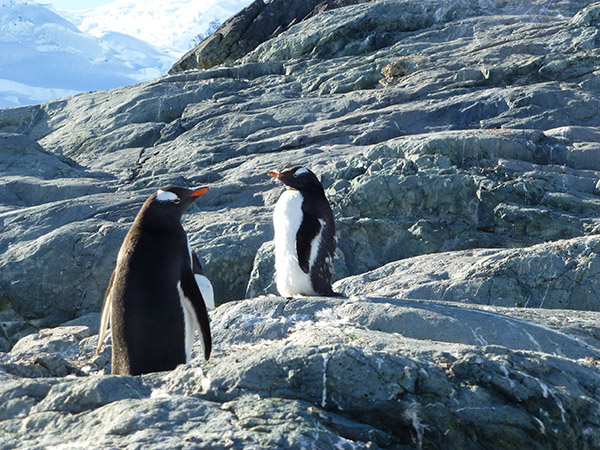 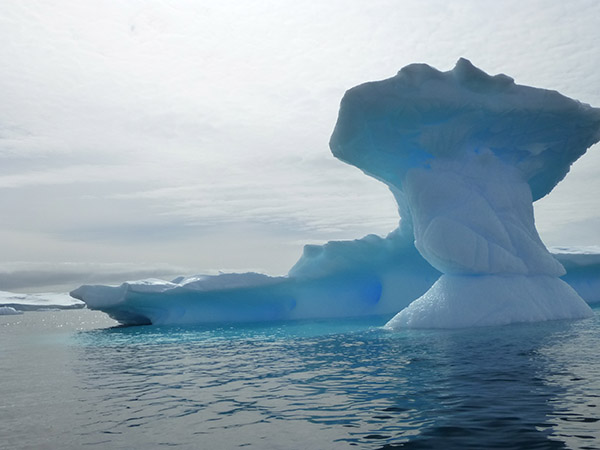 played hooky from most of the lectures by the naturalists and historians aboard. I just wanted to be there, to be present. I did not want to think. Maybe I was being influenced by the unspoiled wildlife–the wonderful penguins, the seals, the whales, the birds. Maybe I didn’t learn all their names and habits but I sure tuned in to their reptilian brain simplicity. What calming bliss.

So I walked and climbed and sat and watched hardly believing I was in this place that was so otherworldly and yet feeling that this is truly our Earth without all the artifices. It is our real world unfiltered, unedited, unchanged. I had such a sense of being small, insignificant, a voyeur watching a big, powerful world unfurl in front of me. This was not a negative feeling. It was a marvel for me to be a small part of this larger incredible world of ours. I felt on a quest to see the truth, to see our planet, to take it in as it is without all our modifications and without my projections or blinders. My heart was big and full the entire trip. It swelled when I saw icebergs as big as apartment buildings, one doing the favor of turning upside down in front of us–wow. When I saw the humpback whales ‘logging’ or sleeping looking like logs I 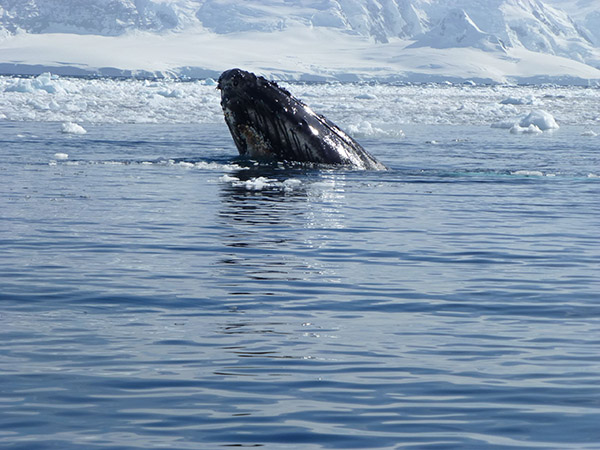 was tearful in gratitude and humility. Even when I saw a leopard seal kill and eat a penguin I was honored to be a witness to the horror and the naturalness of the violent act. I was in joy!

Eventually returning to the mainland back through the Drake Passage took another 2 and a half daunting days of storms. I returned to my safe bed harbor and rested among the turbulence feeling the glow of being familiar with this, knowing this, and in a crazy way loving it. Sure it was a bit scary to be told by our veteran Captain of 25 years that this was the roughest waters in the Drake of his experience but also feeling so humbled to be a witness to this experience. 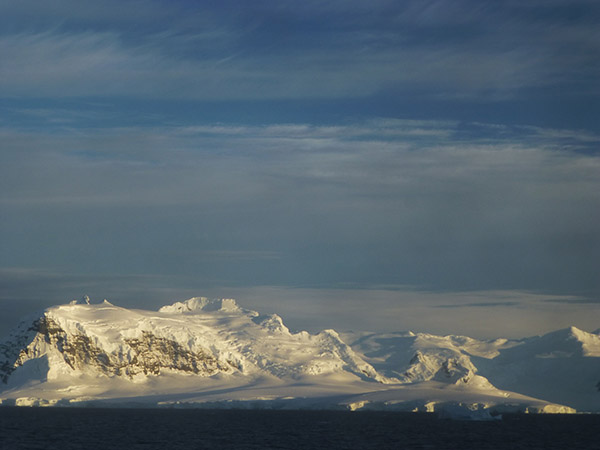 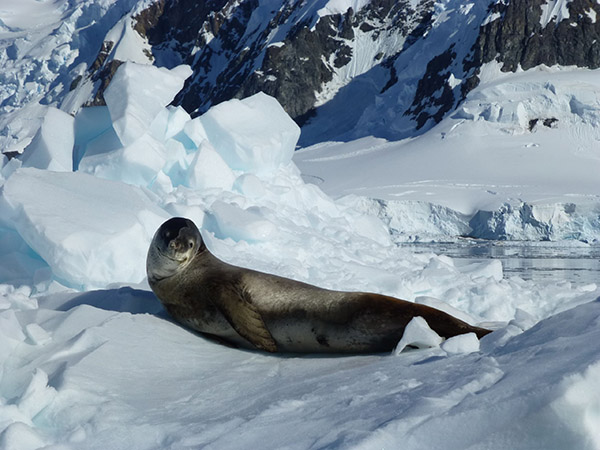 The land trip home was dreamlike as my heart remained held by the Antarctic and the transition to my “reality show” was luckily snubbed. It seemed like we were returning home after a long, long trip. I think that we moved into a place so unknown and foreign to us that time was suspended. My primary feeling upon returning was one of being very blessed, privileged and content. I canceled a few pending trips almost feeling like I had finally been where I wanted to go and to travel was not any longer such a driving force for now.

The dramatic images I witnessed in the Antarctic were seen by my artist eyes that reduce things to light, color and form. It’s like squinting when what you’re looking at retains the essence of the viewpoint, not the details. My memory logs how I felt in a “place”. Then there’s the heart factor that imposes itself, impossible to keep at bay.

So back in my home studio I have a mind’s view of black paintings for the granite mountains and white of all shades blanketing them. I also imagine some of my photos and moreover sculptures of the ethereal icebergs unfolding. Ah, maybe that’s where the blues, pinks and yellows will manifest. Then there are the collaborative pieces that my husband, David and I are contemplating. It will all evolve in time as it’s meant to be. Savoring is first. I’m not ready to let go of the savoring just yet. Maybe soon. Maybe the savoring will inform my work. It must don’t you think?

Stay in touch and let’s see what unfolds. 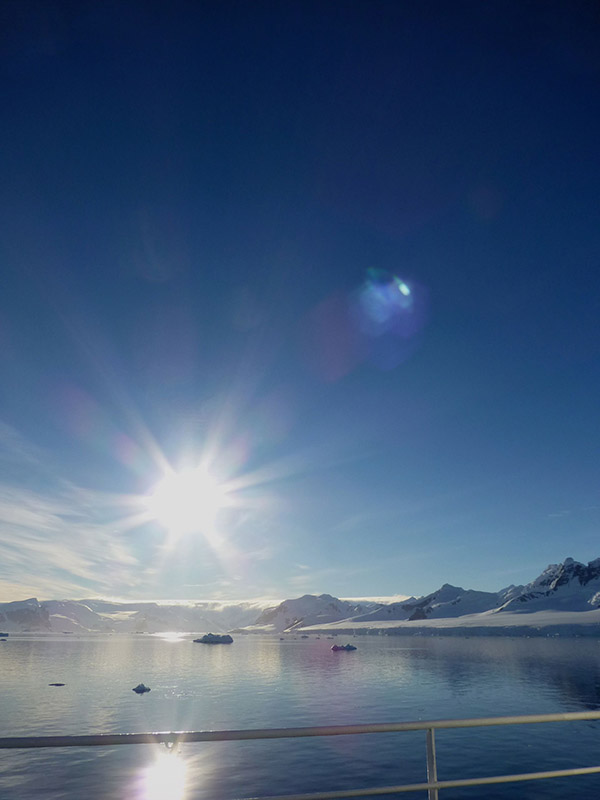 *Thin places are the places on Earth where the concrete world that we perceive and the spiritual world we believe are thought to touch.