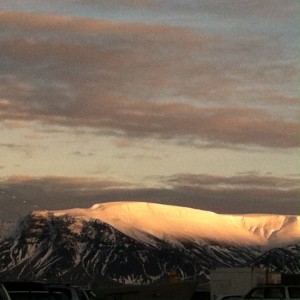 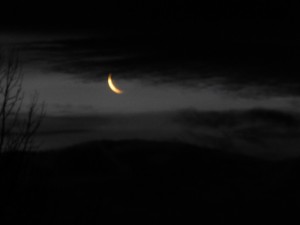 NOTE: It is a bit presumptious to write about Iceland when announcing an exhibit inspired by the Antarctic but my Iceland Artist Residency happened most recently and I do want to share my impressions. You can also read about my excursion to Antarctica that inspired my work in the “Melting” exhibition here.

Iceland is a magical place. It is totally understandable to me that early settlers believed in elves in this otherworldly gorgeous place. Its beauty has an ethereal quality. ‘Thin Places’ are thought to be where earth and heaven meet—then surely Iceland is such a ‘thin place’.

I chose to be in Iceland in the winter because I wanted to further explore darkness. My fear of the dark as a child gave me a family nickname of ‘Fraidy Cat’. My adulthood didn’t help me grow out of that fear until just a few years ago when I set about making black paintings. As so often happens in my art practice my issues are addressed even before I understand that intention.

But as I painted black I came to love all the possibilities of the color, all the beauty of nights and darkness and to look squarely at my fears. I recently read that if we didn’t have so much artificial light sources we would see into the darkness and recognize sources of nature that are now unseen, forgotten and unknown. I believe this as my life has become richer for the beautiful revelations of darkness.

“Though my soul may set in darkness, it will rise in perfect light; I have loved the stars too fondly to be fearful of the night”.
~ Sarah Williams, from The Old Astronomer to His Pupil 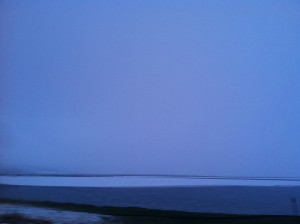 So that was my original intention of living in 21 hours of darkness each day in Iceland. A Finn living in the Arctic Circle told me one time that winters turn the world upside down—the darkness is above and the light is below. As a believer in having new experiences, turning my world upside down seemed to be a great choice. Also having been told that the low horizon light shrouded environments in a blue monotone, how could I not apply to an Artist Residency for Dec-Jan. Gullkistan,in Laugarvatn, Iceland turned out to be a perfect place. It is only 1 hour from R 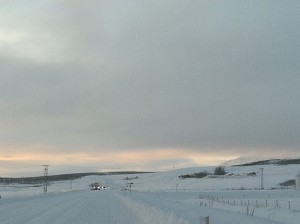 eykjavik but remote with a population of only 250. It is also on Iceland’s Golden Circle of remarkable nature.

One of the aspects of traveling that keeps me on my toes is always the unexpected no matter the time and effort made in planning. So it was that there was a blizzard the week before we arrived in Iceland and driving to Laugarvatn introduced us to interesting road condit 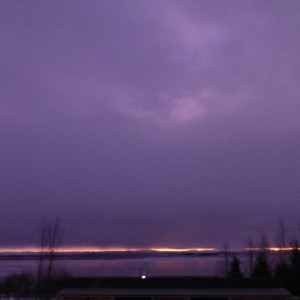 ions as we thanked our rental car for the spiked tires that hugged the icy roads.It was also a blessing that David instinctively remembered all his icy weather years of driving in Wisconsin. After a week in Laugarvatn we had what I would call a blizzard. It snowed for 3 days and banks grew to 36”. The plows were out day and night and crews worked relentlessly to clear the roads. This was well choreographed as they had done it many, many times.

Then there was the cold infection I came down with the second day at Gullkistan that sent me to a health clinic with swollen glands and subsequently into Selfoss, the largest Southern town, for penicillin. Even with coughing and low energy I set up my studio at the residency with a wonderful view of the Laugarvatn Lake and the surrounding mountains where the weather and color palettes were constantly changing. Frankly the views distracted me often from painting but I did photograph the views that would inspire my work back in my home studio.

Surprisingly there was more light then I anticipated starting around 11AM and retiring around 3:30. This changed to expand by 5 minutes each day after the Winter Solstice December 21st. So the first work I did was 40 small panels with several coats of black, gray and finally graphite that was sanded and buffed several times and for me held the allure of the volcanic stone and the vast lava fields resulting from the volcanic Island and its now 30 active volcanoes. This work, Winter Lyrics, will be buffed further to a luster and installed on wall ledges. 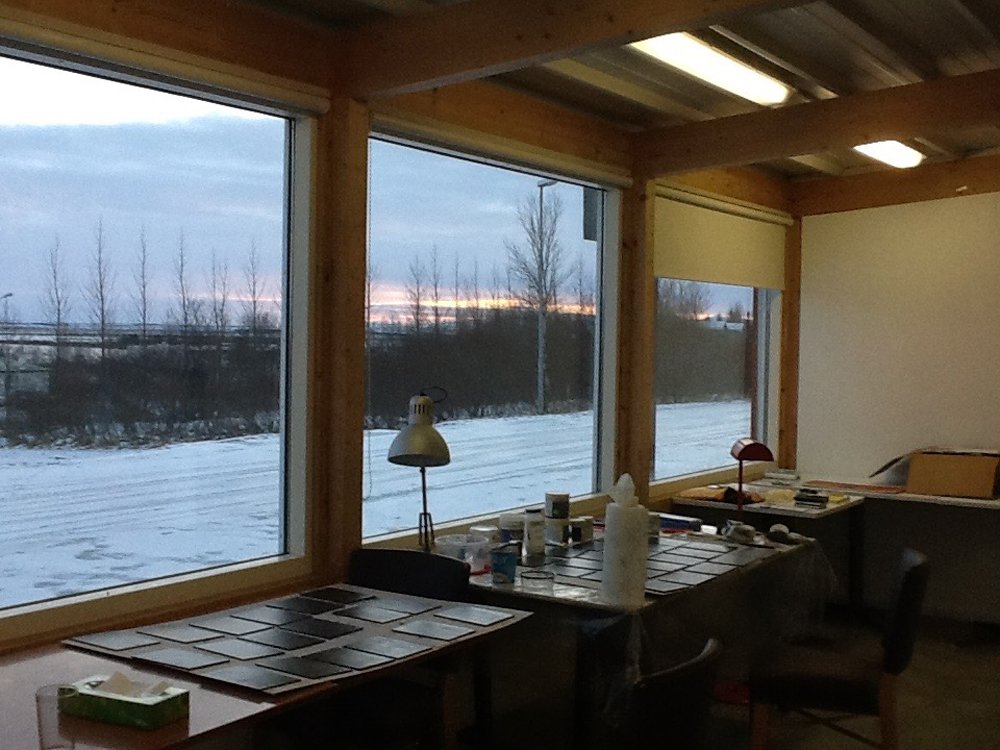 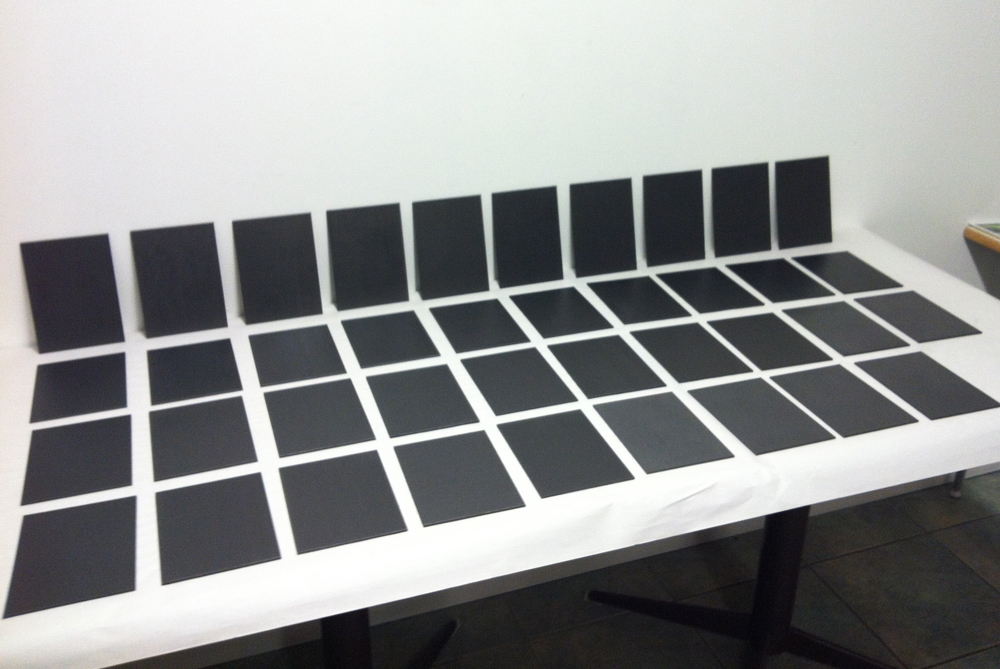 Routines soon became apparent after a couple of weeks of acclimating to not ‘sensing’ the time with dark skies. So like the natives we woke in the dark and I set off to the studio with cleats on my shoes to navigate the prevailing ice. In the studio I worked until it had been dark a couple of hours (around 4-5pm) and then back to our apartment for dinner, mail, Icelandic and Scottish BBC TV and bed again under warm comforters. 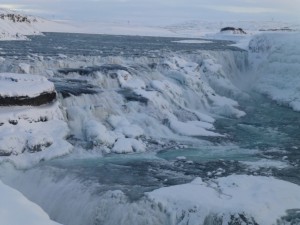 I soon acquired heavy wool fisherman knitted mittens which kept my hands warmer than gloves and a knitted cap. In Iceland I learned to dress warmly and was rarely uncomfortable unless it was 1AM watching Northern Lights or the wind was gusting. At home in winter in New Mexico with our sunny days I run out with few outer clothes and then complain about being cold. You never forget the cold in Iceland which many days was no colder than in Albuquerque.

So the sights—but to clarify everything was a sight to these unschooled eyes but we did venture further on a windy day to Gullfoss Falls which is a Niagara Falls comparison. A huge, loud, beautiful and in January icy wonder. To arrive there we had to pass through Geysir Hot Springs which has blowholes that became active about 1000 years ago. All over Iceland you see steam bubbling upwards but in Geysir they are more concentrated.

The drive was marvelous as we passed many small Icelandic multi-colored horse herds. Beautiful animals weathering the storm as their sheep buddies were kenneled in barns. The brave horses were captivating as they sometimes would be huddled together against the wind forming a predominately brown hill. 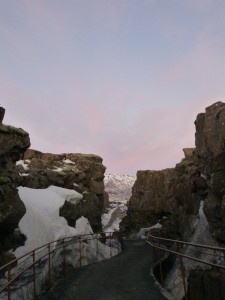 Then a 20 minute ride in the other direction from Laugarvatn was Pingvellir National Park located on the Mid-Atlantic ridge. It was the original parliament meeting place of the early chieftains. I walked through Almannagia’s deep cliff gully where the North American and the European plates drift apart at 1” a year. It is an odd but impressive feeling to walk where Iceland is literally splitting apart.

Toward the last week of our stay we were alerted that there would be Northern Lights and we did see them softly over the mountains but the third night we drove further away from town into the darkness and had an unbelievable light show. That the Universe could give us such a visual feast brought tears to our eyes in gratitude. It is choreographed to an unheard musical piece as the light dances to changing rhythms, intensities and patterns. It is NOT a cliché—it is a phenomenon of great beauty. 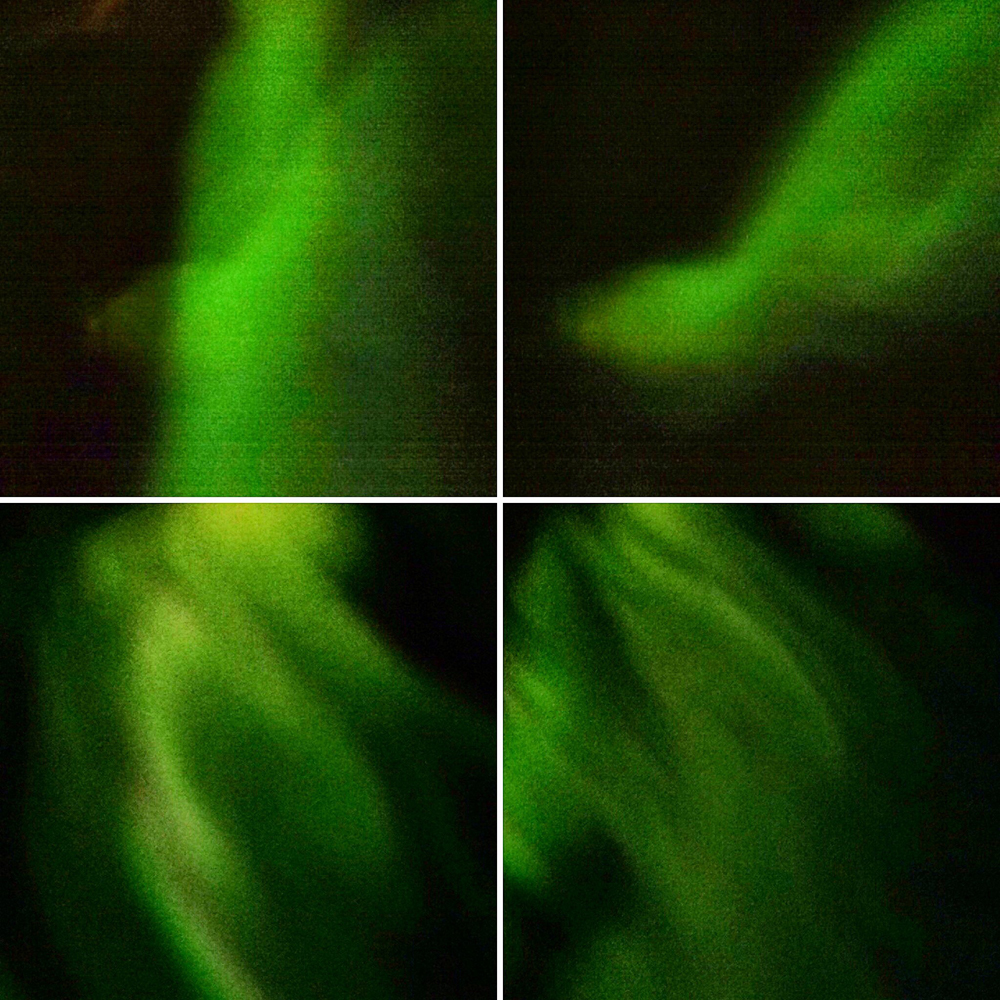 And so went our days and weeks of work and soaking up our experience. At the end of our 4+week tenure we decided to drive along the East coast’s fishing villages toward the airport. Knowing th 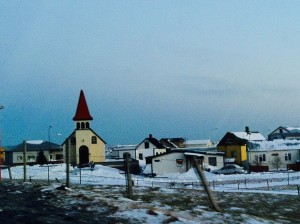 at the Blue Lagoon was closed for renovations gave us a sigh of relief as we didn’t have to go to what is clearly a crowded tourist haven. However we did stay within sight of it and saw some futuristic hydro-energy plants that were huge and spewing thick fog and clouds. These provide the electricity and heat for Iceland. 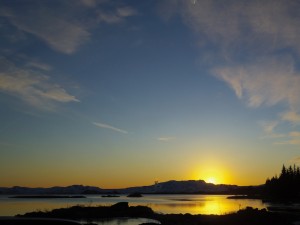 our last day before boarding our plane for the US we drove around the Reykjanes Peninsula which gave us a clear picture of isolated fishing villages situated on the rough North Seas with turf houses and churches. Seeing these remote places reinforced for us the resilience and can-do spirit of Icelanders with their fierce Viking origins.

We left the next day vowing to return soon when we could be tourists and when the roads would be more navigable. The West Coast and the North are calling to us and we are anxious to respond knowing as we do now the ongoing wonders of Iceland.

Meanwhile in my NM studio I am continuing to be inspired by the colors, impressions and feelings that I experienced in Iceland. 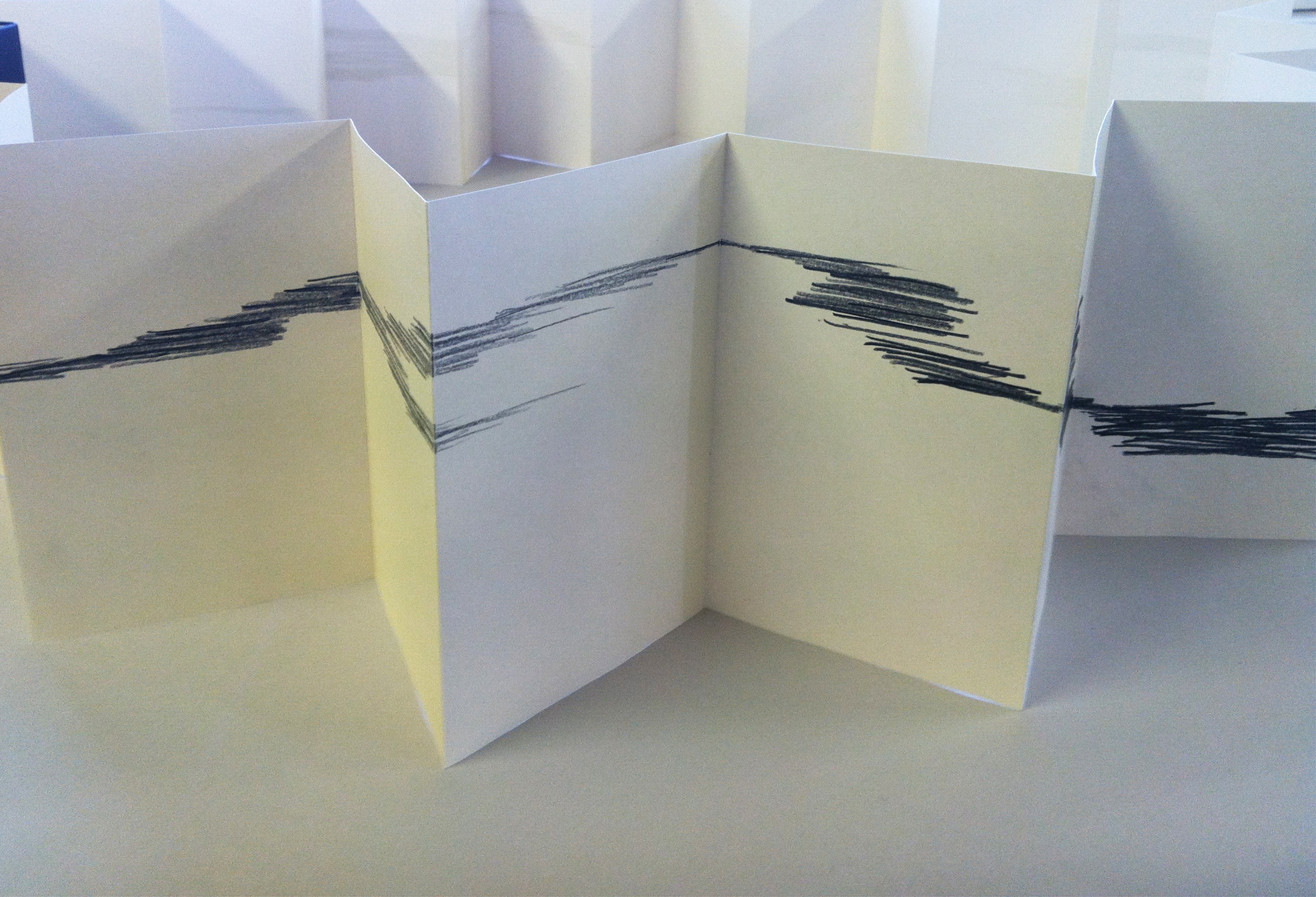