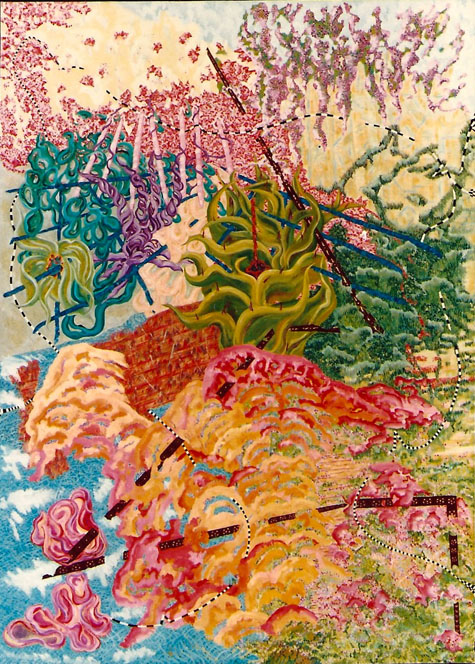 Surprisingly, I did this painting in 1983! Not like my reductive work of the last decade plus, eh? It’s a 72” x 52” oil on canvas painting from a series entitled Mosaics. That group of complex work used fragmented compositions of flora and architecture as metaphors for man and nature.

Mosaic XIV came back into my world vision when someone in Ohio emailed me that she had been given it by an Ohio company for work rendered and wanted some information about me and the painting’s origins.

My inventory system provided the details of where the work was made, when it was finished, where it was shown, the consultant who had sold it to the Ohio company, and the sales price at that time. I also dug up a postcard announcement of the painting that advertised an exhibit of the Mosaics in Chicago.

It’s obvious that my work has changed in appearance although my concerns are still color and the natural world and I use architectural formats. I’ve kept a few pieces from this series for myself but seeing and enjoying this painting again makes me want to let the others out into the world. It is a special feeling to see my older work and appreciate it. “Well done, good work”, I say but it is like saying it about someone other than myself—a younger person in a different time and place. A chapter of my life that in part I’ve left behind but one that had work I can admire.